Archive for Self Love

Losing My Mind, Finding My Heart 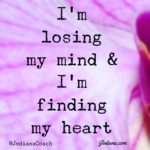 Actually, we need both ha ha. The mind is obviously useful. Just not when it gets wrapped up in the painful, false stories we tell ourselves (You know the ones of which I speak: “He’s better than me”, “I’m not good enough”, “I have nothing to offer that’s not already out there”, “it’s not safe to get close to people”, “I’m too fat”, “I’m too thin”, “I fill-in-the-blank too much”, “I always screw it up”, “love hurts”, etc).crossroadspharm.com

It’s all all useful bullshit. Yes. Useful. Because in those stories is a trail to your Truth 🙂 The great thing about the intellect is… you can also use it search; to find Truth; to direct yourself to connect to the greatest parts of You; to Self-discover; to become aware; to discover the gold in your experiences (no matter how good or shitty they seem); to make plans and to motivate you into action toward what you want to manifest; to move you toward what you want and deserve.

And the even more cool thing about the intellect? Is you can allow your #heart or #spirit or your #higherself or #divine to use it to create, inspire, and empower. Boom 👊🏻#soulysticliving #spiritualpsychology #awakening #consciousness #spirituality #spiritualdevelopment #loveyoubetrue #jodiana #selfgrowth #personaldevelopment #awareness #realizations #love #spiritofkindness #servantofpeace #manifest #miraclesCrossroadspharm

A Man’s Rejection Has Nothing to Do With Your Value A man’s rejection of you has nothing to do with your value or worth as a woman. What if? What if divine is using this experience to mold and shift you into the woman you’re unfolding to be? The woman that your future “special someone” wouldn’t recognize without you having gone through these experiences? And whose to say divine isn’t molding and shifting your “special someone” right now, too?
What if the experience of being rejected really has nothing to do with your value and worth, but actually is an opportunity and catalyst for your own self growth? An opportunity to come face-to-face with the parts of you that you judge so vehemently, and to love and accept those layers of you even more passionately than ever before? If that were true, what parts of you are crying out for love? Let it arise, and love that.

If you’re a dude reading this, the same applies.

The only defining catalyst in whether or not you are good enough? Is what goes on in your own head. Get in touch with that, and your whole world changes. You are perfect and whole just as you are. You are enough. And I love you.

Remember: God doesn’t always give us what we want, but God gives us what we WOULD want if we could see what God can see and if we knew what God knows. Never give up.

I inevitably come across social media posts with reckless images of someone abusing an animal or child, urging me to share the content.  For the love of humanity, I refuse to share.  Below are some of my reasons why, and a glimpse into what I do instead.  Read on to discover the importance of your own vibration and in joining me in this practice.

Everything in the Universe moves and vibrates.  That includes us.  The thoughts we have (and hold) have an immediate impact on our vibration and, much like a ripple in a lake, our vibration influences our own environment; every life we touch; and the world at large*. So, when I am asked to share these images and horrible stories, I simply refuse, because:

A.  I think about how I FEEL when I see these images.  That feeling is something I am vibrating out to the Universe.  What I vibrate at impacts my life and every life I touch.  Which raises a couple of questions:

B.  Once we see the image, it’s in our mind and heart.  Our experiences, thoughts, and environmental input are not just in the head, they are also experienced in the body.  Every image you see; every book you read; every movie you watch, every experience you have, every trauma you experience – they are all stored in this mind-body system.  This includes the energy bodies, and it includes That which is connected to All That Is.  So, one must ask ones Self, “Why would I want to proliferate this image (and associated feelings) into my own body?  Or that of others?  Or out into the All That Is?”

C.  The All That Is holds the Cosmic Web of Consciousness; every thought that exists and has ever existed.  Not just your thoughts and experiences, but that of every other person who is currently living or has ever lived.  The more negativity we proliferate into the Cosmic Web of Consciousness, the more negativity we build up in our current societies and all generations of the future.  What’s more, this negativity must eventually have an outlet.  The same as people are driven to random acts of kindness, susceptible ones are also driven to random acts of violence (such as the 2012 Auorora ‘Batman shooting’ or the terrorist acts of the twin towers).  They are all acts, driven by what is stored in the All That Is.  Better to proliferate love, is it not?

D.  Most people’s initial reaction to something like this, is to wish the same harm upon the perpetrator, thereby proliferating even a bigger storm of negativity and impure thoughts back out into the All That Is.  As we can see in paragraph C, this has monumental impacts upon the entire world now and in the future.  Hate breeds hate.

E.  Once I have seen an image like this, it is very difficult to keep it from popping into my consciousness over and over again.  For most folks, every time the image pops into their consciousness, it will create a holding pattern of keeping them in that lower vibration and bringing up more and more negative thoughts.  Again, these thoughts and feelings get proliferated out into the All That Is and, eventually, those thoughts & feelings must have an outlet.  Why would we do this to our Brothers and Sisters?  Or to ourselves?

So, when I see a post like this on social media, instead of proliferating the negativity and opening the door to my Brothers and Sisters to have the images burned into their consciousness, I pray instead.  I pray and ask God to bless the perpetrator and the victim, and I pray for the liberation of the souls of both.  Then, I post something positive on my own wall; be it a post of gratitude, or a funny.  I hope you will join me in this practice of holding and proliferating a positive vibration, for the Greater Good.

Blessings, Love and Light to you!

In Love and Gratitude,

*Studies have been performed, having a monk or a group of people meditate (holding a higher vibration) to see if it could reduce crime rates in the area.  Preliminary statistics from one study (published in the New York Times) reported that violent crime dropped 23.6 percent in the first four weeks.

The Light and Love of God Hello beautiful people!  Here is the latest creation that I made last night.  A cinch to prepare, oh so delicious, and good for you, too!  Notice all the colors in this soup.  How healthy is that?!  This was a hit with the roommates 🙂 INGREDIENTS C
Water or vegetable broth – Enough to cover the veggies and make it into a soup, ha!

3.  Pour enough water to cover the veggies and go about two inches above them (enough to make it a soup after it boils down a bit).

4.  Bring to boil, then turn heat to low and simmer until carrots and corn are tender enough to eat. Allow Me to Introduce My Sneaky Bitz (Lessons in Self Love)

For example, I woke up this morning and it felt like every muscle in my body ached.  My Sneaky Bitz tried to convince me that I could baby myself and stay home from Ashtanga yoga practice, reasoning that I’m tired, I hurt, I’ve worked hard and I deserve a break, right?!  All valid arguments, right?  Why not pamper myself a little for a change?  Ha! So you know what I did?  I said, “nuh-uh.  Not this time, Sneaky Bitz!  I caught you!  Haa ha ha!  Nice try!”  Then I got my butt up out of bed and I went to Ashtanga practice.  On the way home, I treated myself with the nourishment of a fresh young coconut (one of nature’s best source of electrolytes).  Then I cleaned my yoga mat and let it, and me, soak up the sun for thirty minutes.  After that, I stepped up my game.

You see, part of the reason for the physical pain is because some areas of my body are weak.  So, I treated myself farther by doing 280 various forms of crunches and 296 reps of various leg lifts.  Then, thanks to my lovely roommates, I treated myself to some home-made Sambar with home-grown lentil and mung bean sprouts!  Take that, Sneaky Bitz!

Actually, you have to be kind to Sneaky Bitz, because it is a part of you.. almost child-like, you have to teach it new ways to be 🙂  Sneaky Bitz is your friend.  Ha ha ha ha.

Truth is, although it sounded good at the time, had I rolled over and went back to sleep, I would have felt really bad about myself later and my practice would have suffered.  If you’re wondering how I do it or how I get the strength or motivation in moments like this, you’re not alone; a friend recently asked me the same thing. It can be defined with two words:  Self Love. But how do you love yourself?  What is Self Love?  Ah… multi-million-dollar questions, each with a several-part, multidimensional answer.

Check out this quote I posted on my Facebook page: So, I asked myself this morning, “If I really, truly love myself, then would I allow myself to go back to bed, knowing the negative consequences?”  The answer was a re-sounding, “NO!”.

If that question doesn’t resonate with you, then try this technique that I used to use as my gauge.  Change the context of the question and ask yourself, “If my best friend were in this situation, what would I advise him or her to do?”  It’s a powerful question that lends us the ability to see the situation through a different lens.  For most people, put in the context of someone other than ourselves (especially someone we admire, respect and love), the answer is easily accessible.

Once, I sat in a car with two young adults (in a relationship) arguing over who had hurt who the most.  After the young woman poured her heart out to me, relaying all of the ‘wrongs’ her boyfriend had done over the past three years, I was astounded that they were still together.  What’s more, I could clearly see that this girl lacked self love.  So I gave her the magic question.

I said “You love and respect your best friend dearly, right?”

“Okay.  If your best friend were in this situation, what advice would you give to her?”

She said, “I’d tell her to end the relationship immediately and leave his sorry ass!”

“Then why do you not love and respect yourself enough to do the same?”, I questioned.

A still silence consumed the vehicle and the rest of the ride was very quiet.  You see, in all truthfulness, this man had treated her very wrong, but I couldn’t tell her that.  It’s something she had to see and figure out for herself.  Her Sneaky Bitz was making excuses for this guy and, up to that point, she was convinced that they belonged together in a relationship.  The next day, she left him.

Do you have a Sneaky Bitz?  What questions or techniques do you use to over come it’s grasp?